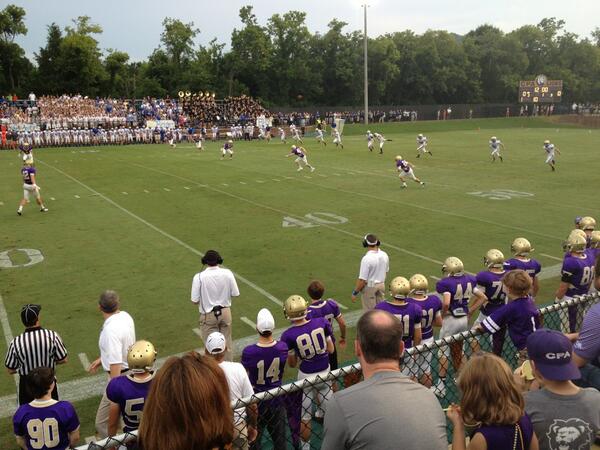 The Christ Presbyterian Academy Lions travel this week to take on the Giles County Bobcats.  CPA is favored in this game, ranked 18th in Tennessee while the Bobcats are 28th. So far this season, CPA has impressed.This early in the season, when a team is undefeated like these two are, it can be hard to know if this early-season success is a fluke or for real.

However, allow me to point out that even though, along with Cascade, the Lions and Bobcats are tied for the best record in AA District 12, it is much, much too early to talk about who will win this district.  Though, of course, if Cascade loses against Spring Hill this week, then the winner of this cat-fight Friday night could be going into week 4 the sole King of the Jungle.

So far, CPA has played a considerably harder schedule, opening the season home against Brentwood with a 17-14 win, then looking really good at Hillwood last week, winning by 28 points, 35-7.  Still, although Brentwood is ranked 36th in the state, Hillwood is ranked 192nd, and anything less than a blow out would have been totally unexpected.

Giles, on the other hand, went on the road to open the season, which can be trying. And the Bobcats barely beat Lincoln County, a team ranked 156th in Tennessee, winning by just two points, 35-33. In Giles defense, or maybe to their detriment, they did lead 28-0 at the end of the first quarter, but were outscored 33 to 7 in the final three.

However, the story of a team barely winning against one of the lower-ranked schools in the state, then winning but not overwhelming the next week against a better, but still lower-tier team, does not sound like the story of a “for real team,” but more of an undefeated fluke.

Because CPA played teams ranked on average 114, and Giles 133,  it is easy to rate this game as an even match between two undefeated teams. But average opponent does not matter so much as best opponent. CPA beat number 36th (Brentwood), a full 75 places higher than the best team Giles has beaten this season. And CPA won more impressively, in both weeks.

CPA fans most likely will go home happy this Friday, with the confidence that comes with knowing your football team is both undefeated and rightly so.  And Giles will, most likely, be wondering what just hit them- and the answer will be right in front of them: there went the first team they played this season that had won a game coming into their match-up.

Notes: Interestingly, niether CPA or Giles has played a team with a win this season until they face each other Friday.  The winner of this game will be watching the Cascade- Spring Hill game closely, since CPA, Giles and Cascade all go into this week undefeated, and neck and neck for first place in II-AA District 12.